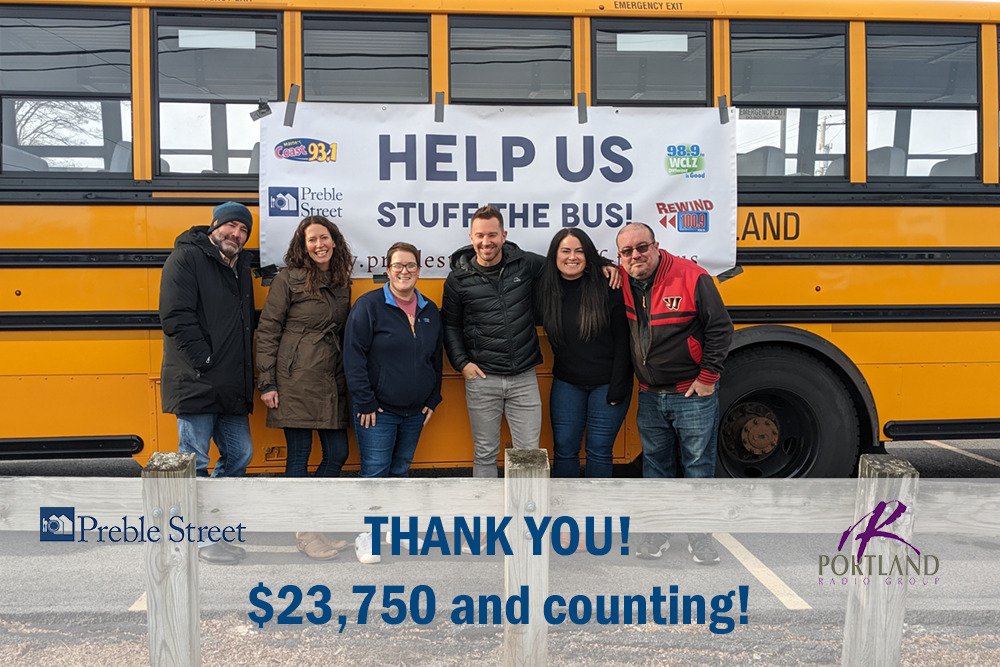 PORTLAND, ME (November 22, 2022) — Yesterday, local radio stations Coast 93.1, 98.9 WCLZ and Rewind 100.9 flipped the switch on their regular formats to air a “trimulcast” Stuff the Bus fundraiser for Preble Street from 5am to 10am. Participants purchased a virtual “seat” on a fleet of school buses for $50 and exceeded the $20,000 goal to reach $23,750! Donations are still coming in. All proceeds benefit Preble Street Emergency Food Programs, which provides over 1,000,000 meals each year to Mainers experiencing hunger.

From the time it began seventeen years ago through 2019, the Stuff the Bus food drive was hosted by Rewind 100.9 and focused on in-kind food donations that literally filled several school buses and brought in almost 2 million pounds of food to Preble Street. The food drive would conclude with dozens of volunteers unloading thousands of pounds of food at Preble Street. Like many events, in 2020 the drive went virtual with a focus on monetary donations, and in 2021 Coast 93.1 and 98.9 WCLZ joined the efforts. As a nonprofit, Preble Street has the buying power of 7 pounds of food for each dollar!

“I want to offer a sincere thank you to Portland Radio Group and their member stations for being such incredible supporters over the years,” says Preble Street Executive Director, Mark Swann. “The annual Stuff the Bus fundraiser has an enormously positive impact on our ability to provide nutritious meals and food boxes to Mainers in need, including youth, adults, New Mainers, Veterans, and families experiencing hunger.”

Preble Street provides thousands of meals each day from its Food Security Hub in South Portland and two soup kitchens at the Teen Center and Florence House shelter for women. Since 2020 they have been providing over one million meals each year.

“At Portland Radio Group, ‘local’ is at the core of everything we do, and no organization epitomizes the selfless calling to serve our local community like Preble Street,” shares Phil Zachary, President at Portland Radio Group. “It’s truly a privilege to support their efforts in such a modest way.”