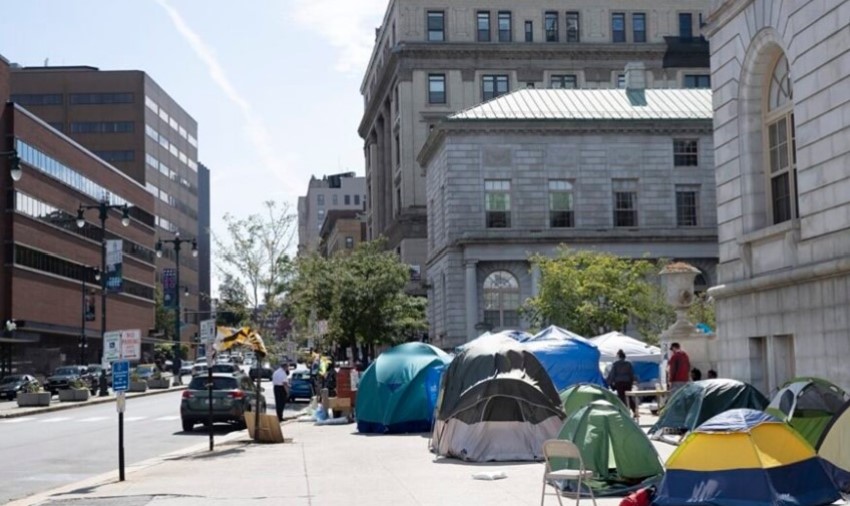 Our View: Long nights ahead for homeless in Maine’s largest city

Rising poverty is symptom of the COVID crisis, stressing services for those in need.

BY THE EDITORIAL BOARD

We have grown used to the grim statistics of COVID, as we follow trends of new cases and death tolls to measure the progress of the pandemic. But lost jobs and shuttered businesses are also part of COVID’s cost, and we need to count rising poverty among the virus’ casualties.

Some people catch the virus and have only mild symptoms, while others need to be hooked up to a ventilator. Just as with the disease, the economic impacts are not evenly distributed.

Most Americans kept their jobs this year and don’t face eviction or foreclosure next month. Those with money on the stock market are ending the year in better shape than they started.

But the numbers of people seeking shelter and lining up at food banks show that the economic infection is spreading rapidly and causing terrible results.

One eye-popping piece of data is the number of meals served by Preble Street, a social service nonprofit that has been operating a soup kitchen in Portland for more than 30 years.

When COVID struck, Preble Street shut down its soup kitchen and day shelter to avoid the dangers posed by indoor gatherings. The organization began distributing meals to other shelters and places where people in need could be fed.

Despite the complications, Preble Street reports that it will serve 1.2 million meals this year, up from 640,000 in 2019. Their once-a-week food pantry has been expanded to five days. These numbers matter because food assistance is a leading indicator of rising poverty. People in crisis will seek help getting a meal long before they lose their home.

There are people in poverty in every Maine community, but about half of those who become homeless will end up in Portland.

With the state’s help, the city had a strong start in the early months of the pandemic. To limit the spread of COVID, it had to cut the capacity of the Oxford Street Shelter roughly in half, reducing it to 75 people a night. But it was able to make up for the loss of space by opening an auxiliary shelter in the Portland Expo and placing homeless families in vacant hotel rooms. And Preble Street opened a temporary shelter at the University of Southern Maine’s Sullivan Gymnasium that housed an additional 50 people. But progress has been slowed since then.